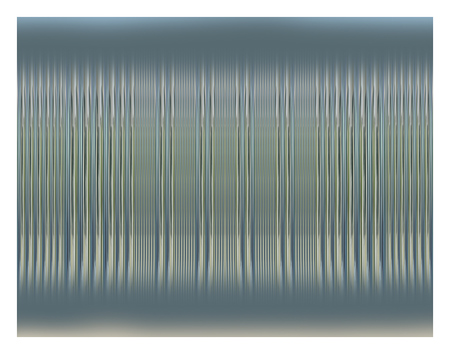 The Tremolo and Ditch Plains surf series share a process and subject matter although the sensory objectives differ: Tremolo is about the speed and frenetic guitar playing of surf guitar music and Ditch Plains is about liquidity - the movement of water.

The Tremolo series came to me while listening to the surf guitar music of Dick Dale. During the late '50s, musician Dick Dale became an avid surfer, and looked for ways to mimic the surging sounds and feelings of the sport and the ocean on his guitar. He developed a highly distinctive instrumental sound and was dubbed "King of the Surf Guitar". He is known for rapid fire picking style and amplifier reverb along with incorporating Middle Eastern and Eastern European melodies in his writing and playing. He worked closely with the Fender Company to develop the amplifier for electric guitar (paving the way for Jimi Hendrix and Van Halen and the metal artists). The equipment enabled the production of the thick, clearly defined tones he heard in his head, at undreamed-of volumes that he demanded enabling him to replicate the feeling of being in the roaring sea while surfing. He also broke new ground in the use of portable reverb effects, creating a signature sonic texture for surf instrumentals.

Like Dale sought to create music to mimic his sport, I began the Tremolo series with the intention of creating images to capture the reverberation of the music. Found images dictate the colors of the surf and surf music scenes but it is in the manipulation of images cutting them into bits that makes a visual vibrato that corresponds to the tremolo of this music. With speakers cranked up listening to legendary songs like Apache, Mirsilou, Pipeline, Sleep Walk, and Walk Don’t Run, I combed web for amateur surf videos of Ditch Plains in Montauk. Screen capturing stills with the same rapid fire tempo as the music, I curated a cache of digital camera-less pictures to incorporate into the series. The DNA in the pixels of these pictures is from representational material that has been distorted beyond representation. It was never my intent to depict images of surfing – Tremolo is about vibrato in an abstract sense. It is about the eyes translating what the ears hear. The Ditch Plains series evolved from the Tremolo series using the same cache of captured images to determine the palette of the sea and surfing using video stills but the movement in the Ditch Plains Surfing series is more about the sea, surf and waves than it is about music.