CONSULTING > AVAILABLE WORKS > MARK HAVENS
ABOUT MARK HAVENS:
In addition to his studio practice, Havens is assistant professor of Industrial Design at Philadelphia University. His backgrounds in graphic design and industrial design have undeniably influenced his studio practice which has evolved from the perspective of an artist with a camera rather than a photographer in the conventional sense. He has not limited himself to the traditional materials and presentation exploring print making materials and methods. Havens uses digital technology in his image making to aesthetically and conceptually create each project. He works in series or photo essays as most artists do but he generally creates more than a photo essay resulting in prints as he continually explores new materials not for the sake of novelty, but to support and embellish the concept of his vision. For the "Out of Season" series, he was focused on a book first and printmaking second. His newest series shot of the last rodeo in NJ -“Hurricane Ballroom” likewise is about a book but instead of a traditional publication, it will be a very limited edition of 10 leather folios with compartments to hold 15 disublimations on anodized aluminum. These images are imbedded into the "gold" metal rather than printed on the surface (like awards or plaques) making a statement of permanence and paying reverence to the characters of tensile strength pictured in scenes from the wrestling ring. This portfolio/book will be available in 2016. 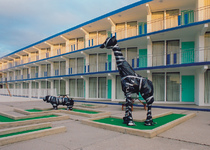 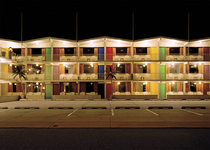 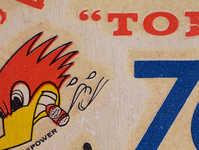